Hi,
The primary task I am focussed on currently is to fix any flaw I come across in the code base. This week I stumbled upon multiple instances where workflow could have been better.

A tiny but significant change made at the start of this week is the removal of smack-tcp from the websocket module. Remains from previous approach (eg: failureMap inside okHttpWebsocketImpl, not so useful - boolean usingHttp inside transport descriptor) have been removed. Exception descriptions now show meaningful messages instead of `ClassName@someHexNum`. WebsocketRemoteConnectionEndpoints no longer hassle by extracting host, port and scheme from the endpoint obtained through http lookup. Instead WebsocketRemoteConnectionEndpoint conveniently wraps the endpoint inside a URI.

Logging descriptor has been changed significantly and is now moved inside okHttp's dedicated package. It no longer extends okHttp's Interceptor and now depends on SmackDebugger. Even so I am still trying to figure my way around debuggers. Improvements have been made to the core class - OkHttpWebsocketImpl, for the closingWebsocket phase.

The most important learning this week explained to me by my mentors, 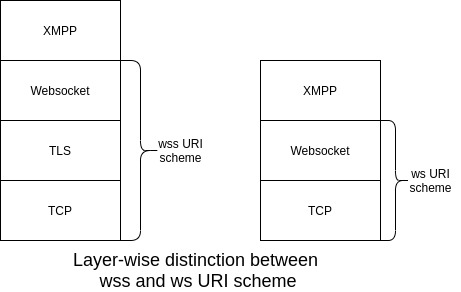 The websocket subprotocol states that TLS cannot be used at XMPP subprotocol layer instead it should be enabled at at the websocket layer. So whenever, we use an endpoint using `wss` scheme, it refers to an endpoint secured by TLS. This concept has now been realised inside websocket module. When SecurityMode is set to `disabled` it connects only to endpoints with `ws` uri scheme. When SecurityMode is set to `required` connection is established only with endpoints with `wss` uri scheme. Incase we preferrably want to connect to a secure endpoint but are open to establish connection with insecure endpoints if something goes wrong, we can use SecurityMode `if-possible`. This was my first week of the last phase. See you later.